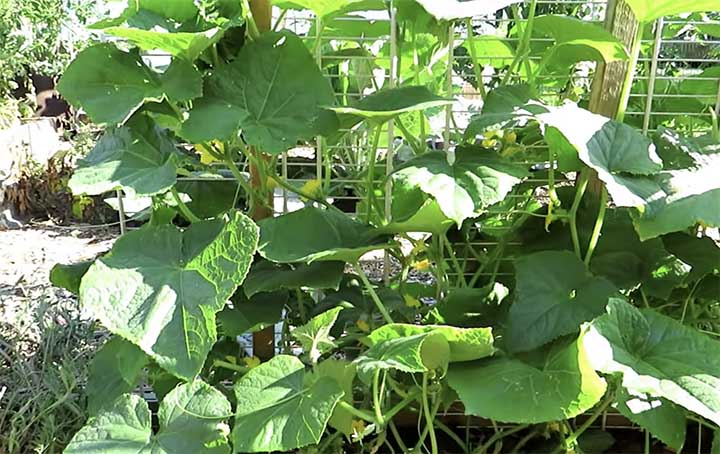 Cucumbers are a popular vegetable to grow. Sometimes it is hard to know how much sun a cucumber plant needs.

How Much Light Do Cucumber Plants Need?

The amount of light differs inside and outside.

Cucumbers need at least six hours of sun and will grow much better with eight hours of sunlight or more. In hot climates, that should be primarily morning sun with afternoon shade during the hottest hours of the day.

Cucumbers grown inside either need eight hours of bright indirect sunlight a day or twelve to sixteen hours of light from an artificial light source.

Types of Lights To Grow Cucumber Plants Inside

There are several types of artificial lights to grow cucumbers inside. A cucumber will not grow in a room with just a regular light fixture in it. The artificial light must be closer to the plant and brighter. Ideally, the artificial light should be a long bar placed four inches above the tip of the vine. Traditionally, these lights are suspended from chains to make it easier to adjust their height. The lights are moved up as the vine grows.

Incandescent light bars are being phased out of production, but there are some used ones available. Incandescent lights produce heat as well as light, so they need to be a little higher than other lights to keep from scorching your cucumber plant. They are also very inefficient and expensive to run. Most incandescent lights do not include the light spectrums most beneficial to plants.

Fluorescent lights are relatively inexpensive to operate and do not get hot like incandescent lights. The light is emitted from the entire length of the tube, so reflectors are often put above the light to direct the light down. As the tube ages, the light will get fainter, and the edges will get darker gray and not emit light. Most tubes come in pairs, so if one light burns out the other may not work. Fluorescent bulbs also take a few minutes to come on, especially when they are cold.

LED lights are the most energy-efficient light fixtures and are cool to the touch. They can be expensive, although the cost is coming down quickly. LED lights can be purchased that emit the entire spectrum of sunlight so they provide all the colors of light your cucumber plant would get from the sun. LED fixtures also produce a more even amount of light that starts almost instantly when you turn the fixture on.

HID lights are powerful and produce light so intense they need to be mounted much farther away from the cucumber plant, or the light will scorch it. HID also generates heat. These lights are not really practical for home use because they are expensive and use a lot of energy.

Measuring the Light A Bulb Gives Off

You need to look at the specs given by the light manufacturer to tell how bright a light will appear to your plants.

Footcandles are the measure used in agriculture and horticulture to measure how much light the sun puts out. If you are using a full spectrum light, footcandles will work to see if the light given out by the fixture is adequate for the cucumber plant. For example, unobstructed sunlight at midday in the summer is about 10,000 fc. Footcandle meters are inexpensive and may be a good investment if you grow many plants inside.

PAR is the range of wavelengths in light (400-700 nanometers) that plants use for photosynthesis. It is measured using Photosynthetic Photon Flux Density (PPFD). PAR meters are more expensive than footcandle meters but give a truer picture of how much usable light a cucumber plant is getting. Higher PPFD numbers are better. For example, a high-end full-spectrum grow light may have a PPFD listing of 74.92umol/S.

These two factors affect how we see our plants under a plant light.

On a scale of 0 to 100, CRI measures how true looking the light renders the object under it. You want no less than 80, with numbers above 90 considered high CRI.

Kelvin is usually associated with temperature. In light, it shows how warm, neutral, or cool a light’s tones are. Low numbers have more red, while the higher, cool lights have more blue. Direct sunlight is roughly 5000 Kelvins.

If you are purchasing a grow light for your indoor cucumber plants, the best light is a full-spectrum LED light with a PAR of over 70 and a CRI of over 90. You can shine this light on your cucumber plant for 12-16 hours.

Can You Grow Cucumber Plants In The Shade?

Partial shade, defined as 2-6 hours of sun a day, is not adequate for cucumber plants. If the plant does grow, it will have few blooms or cucumbers ( Read my article to know the average number of cucumbers per plant for your reference).

Partial sun is another name for partial shade. In full shade, defined as less than two hours of sun a day, cucumber plants will die very quickly.

Can My Cucumber Plants Get Too Much Sun?

A plant doesn’t get too much sun so much as too much heat and dryness. If a plant does not have adequate water, it cannot regulate its temperature well and can get sunscald. Heat adds to this problem. A well-hydrated plant rarely gets sunscald. If you live in a hot climate, spreading shade cloth over your cucumbers can help lower their temperature while still allowing them to get the sunlight they need.

Indoors, the length of time the lights are on can affect how the plant grows and produces cucumbers. Generally, lights should not be on for over sixteen hours.

No, they need to be planted about an inch deep and covered with soil.

In conclusion, cucumbers need sunlight for eight hours or more for optimum growth. Indoors, cucumbers need artificial light from a LED full spectrum light for 12-16 hours. Place the light four inches from the top of the vine for the best results.