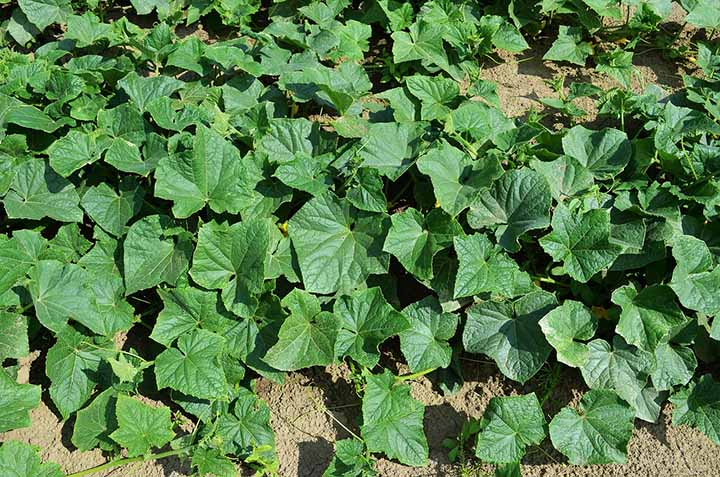 Cucumbers are a popular vegetable to grow. Start your cucumbers off right by spacing the vines far enough apart.

Why Is Spacing Important?

Cucumber vines that are planted too close together have problems finding space to spread out as much as they need to and do not produce as many cucumbers.

The vines compete for the same water, nutrients, and sunlight.

In addition, the lack of air circulation makes it more likely cucumber vines that are too close together will get diseases.

It is hard to find and pick your cucumbers when they have formed a bramble of vines, too.

Proper spacing solves all these problems.

Spacing For Pickling Versus Slicing Cucumbers

Cucumbers contain a substance called cucurbitacin that makes people burb. Some cucumbers have been bred to have less cucurbitacin and are often marketed as burpless cucumbers. These are usually slicing cucumbers.

Spacing For Vine Versus Bush Cucumbers

The Case For Trellising

Trellising cucumbers has a number of benefits. Having the vines up on a trellis makes it easier for air to circulate and helps prevent diseases. The fruits are kept clean and out of reach of ground-dwelling pests like rollie pollies. In addition, trellising your cucumber vines saves a lot of space. When you use a trellis, you can space the vines three feet apart and the rows three feet apart regardless of the type of cucumber you are growing.

Trellises have to be sturdy because a fully grown cucumber vine loaded with cucumbers is heavy. You will need to use wood, metal, bean or pea netting, or sturdy plastic. A bamboo stake is not strong enough. The trellis needs to be about six feet tall for vining cucumbers. Bush cucumbers do well with a large tomato cage. You will also need plastic plant tape to loosely tie the vine to the trellis as you train it to grow up. Do not use wire, as it will cut through the vine. Keep ties loose so the vine can grow without being constricted.

Here is the best spacing for most situations.

If you are using a trellis or tomato cage, you can space all your hills three feet apart and your rows three feet apart. If the rows are any closer together, you will have trouble walking around the trellises.

Growing cucumbers in a raised bed is just like growing them in the ground as far as spacing is concerned. Most people trellis all their cucumber vines in a raised bed because there is not as much room to let them spread out.

Square foot gardening divides the garden into one-foot squares. You can plant one cucumber plant in a square if you cage or trellis your vines. It is really not very practical to let your vines spread out in a square-foot garden because the space is usually very limited.

Cucumbers need large containers to grow, at least 14 inches in diameter and 16 inches deep. Moving to a 24-inch pot is optimal. For pots smaller than 20 inches, plan on one cucumber vine per pot. For larger pots, you can put one vine for every two gallons of soil. Space the vines equidistant around the edges with a trellis in the middle. For long planters, space vines three feet apart. If you are using a hanging basket, you can let the vines trail over the side.

Spacing For Popular Varieties of Cucumber

Here is the spacing for some popular cucumber varieties.

Armenian cucumbers grow into long, straight cucumbers that are best harvested when they are 12-18 inches long. The vines can reach eight feet long. Space these cucumbers every three feet with eight feet between rows if you are not trellising them. If you trellis, stick to the usual three-square feet per plant.

Marketmore cucumbers were developed by Cornell University and introduced in 1968. Resistant to cucumber mosaic virus, these cucumbers grow vines from four to six feet long. Separate hills by three feet and rows by four feet if you do not trellis.

Muncher cucumbers were developed by Burpee. They have vigorous six-foot vines, so they need to be planted on hills three feet apart with six feet between rows if you do not use a trellis.

How far down do cucumber roots go?