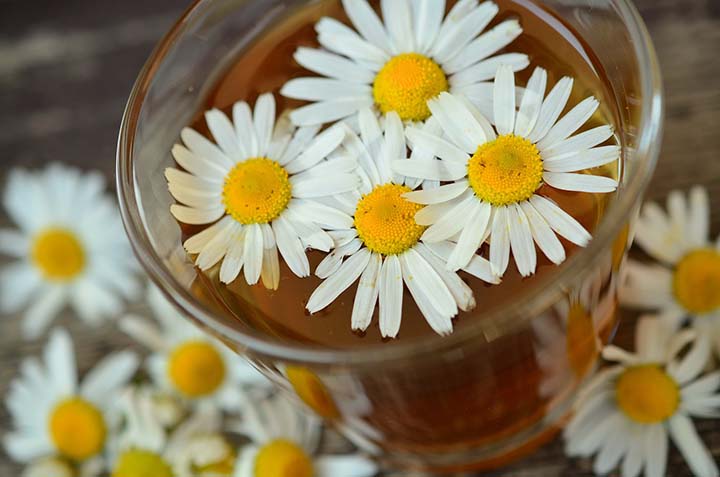 Although these two varieties are related and share some similarities, there are also quite a few differences between the two. Knowing these differences will help you make the best choice between the two for your garden, location, and preferred use.

I have enjoyed both types of chamomile in my garden over the years and have always had great success with growing and using both varieties of this lovely herb.

Roman chamomile makes an excellent ground cover due to its petite size and mounding growing pattern. It reaches a mature height of only 3-6 inches. German chamomile is taller, reaching up to 2 feet, and does well as a back of the garden plant.

Knowing your growing zone is helpful when cultivating any outdoor plant. Roman chamomile is a perennial plant in USDA plant hardiness zones 4-11, while German chamomile is considered an annual growing best in USDA zones 4-9.

It is important to note that although German chamomile is considered an annual, it happily reseeds.

Roman chamomile, typically considered a perennial, is an aromatic herb with feathery leaves and daisy-like flowers. The fragrant white blossoms have a yellow center and resemble miniature daisies or chrysanthemums.

It grows low to the ground, forming mats of foliage up 3 to 6 inches high. The plant’s small size and low-growing habit make it ideal for growing in containers, window boxes, as an edging plant, or even to replace a lawn.

This pretty plant makes an excellent addition to any garden due to its numerous health benefits and pleasing scent. Its resilient nature allows it to be grown in various climates, and its easy-to-care-for requirements make it an ideal choice for novice and experienced gardeners alike.

This type of chamomile is a widely used herb in aromatherapy, tea blends, and other remedies. Native to Europe and now found all over the world, this fragrant plant provides numerous benefits when used properly.

The ancient Romans were said to be one of the first civilizations to use Roman chamomile for its medicinal qualities, which is why it was given its name.

It’s known for its calming effects on both body and mind thanks to certain compounds like bisabolol and farnesene that are found in its essential oil. These properties make it an ideal choice for relieving stress, anxiety, or fatigue—just by inhaling the aroma!

Roman chamomile is also known to be an anti-inflammatory and a mild sedative, making it great for easing muscle pain or reducing allergy symptoms.

Due to its antispasmodic properties can even help with digestion issues like indigestion, nausea, or cramping. Simply brewing some of the flowers into a tea is enough to reap these benefits—though you’ll want to make sure you don’t consume too much as this could lead to negative side effects.

Lastly, Roman chamomile offers many topical applications that can help treat skin ailments such as eczema, psoriasis, bruises, and cuts. Use the essential oil by itself or mix it with a carrier oil ( I like to use coconut oil). It’s also effective for treating headaches, wounds, or minor burns when used topically.

When you feel a headache coming, apply Roman chamomile essential oil to your temples – a roller ball container works great for this.

German chamomile is an herbaceous annual plant that grows up to 2 feet in height. It has deeply lobed and finely divided bright green leaves and daisy-like flowers with white petals around a yellow center.

German Chamomile is a plant widely used in herbal remedies and teas for its calming effects. It has been used for centuries to treat anxiety, insomnia, inflammation, and even menstrual cramps. Studies have also shown it to be effective against digestive issues like indigestion, nausea, vomiting, and gas.

The petals of german chamomile are the most commonly used in teas and extractions because they contain the highest active compounds. The flowers contain essential oils responsible for the plant’s medicinal properties and flavonoids that give german chamomile its distinctive flavor and aroma.

When brewed into a tea or taken in capsule form, german chamomile is known to reduce stress, anxiety, and insomnia. It also can be used topically as a compress or essential oil for skin conditions such as eczema or psoriasis.

German Chamomile has been recommended by herbalists for centuries, but modern science has also backed up its healing properties. Research indicates that german chamomile is most effective in doses between 50 mg – 1 g per day for two weeks or longer for the best results.

The calming effects of german chamomile make it a great choice if you’re looking for something natural to help you relax at the end of a busy day.

Whether it’s brewed into a tea, taken in capsule form, or used as a compress, german chamomile is an excellent choice for anyone seeking relief from stress and anxiety.

Brew a cup of chamomile tea and add some raw local honey. Sip before bedtime to help you relax and enjoy a good night’s sleep.

How to Grow Roman and German Chamomile?

Now that you know all the amazing benefits of Roman chamomile, let’s talk about how to grow it. This herb is quite easy to cultivate and doesn’t require much maintenance. It can thrive in almost any kind of soil as long as there’s good drainage, though sandy soil is best for optimal growth.

Though it prefers a sunny location, it can tolerate light shade and cooler temperatures with ease. Water only when necessary and avoid overfertilizing—Roman chamomile prefers moderate amounts of organic compost or manure if you choose to provide one.

If you’re growing Roman chamomile indoors, make sure the pot has adequate drainage holes and that the room temperature is between 65-75°F (18-24°C).

It will need plenty of sunlight, so make sure you place it near a window. Keep in mind that this herb prefers temperatures on the cooler side and can quickly wilt if exposed to too much heat.

For propagation, Roman chamomile can easily be grown from seed or cuttings. It’s especially easy to propagate by cuttings since all you have to do is snip off a few stems, root them in soil, and wait for them to take hold—which usually only takes about a week or two.

Roman chamomile is also considered to be a pest repellent due to its strong scent, making it an effective natural way to keep your garden free from unwanted visitors.

If you’re looking for another added bonus, Roman chamomile can also act as a companion plant—helping nurture other plants by luring away harmful pests that would otherwise feed on them.

Growing German chamomile is relatively easy if you keep a few key things in mind. To ensure your plants are healthy and thriving, make sure to plant them in full sun and well-draining soil.

They’re known to be hardy and tolerate poor soils, so avoid fertilizers or amendments that could disturb the natural balance. Water your plants regularly without overdoing it – German chamomile doesn’t like wet feet and can develop root rot if overwatered.

When it comes to harvesting, you’ll know it’s time when the flowers are in full bloom and appear white. Cut the stems near the base of the plant with a pair of garden shears and hang them upside down in a dry, well-ventilated area. When the flowers are completely dried out, their petals will be more yellow than white – that’s when they’re ready to use!

The steps of growing roman and german chamomile are almost identical, if you would like to learn more about how to grow these kinds of chamomile, I have written an in-depth article that you can find here.

Note: As with any essential oil or natural remedy, consult a healthcare professional if you have any questions, and always do a patch test before applying anything topically.

Susan Patterson Stevens is a Master Gardener and Certified Health Coach who has been growing gardens for over 25 years. She is a best-selling author of gardening and natural health books. She combines here her love of growing with her passion for wellness and is on a mission to make gardening and wellness accessible for everyone. When she is not busy getting her hands dirty, you can find Susan biking, hiking, kayaking, crafting natural remedies, or working on art projects with her husband Thomas in the Southwest where she lives. Susan is also the owner of EarthenMamma.com a website dedicated to small-space growing solutions and garden information and resources.