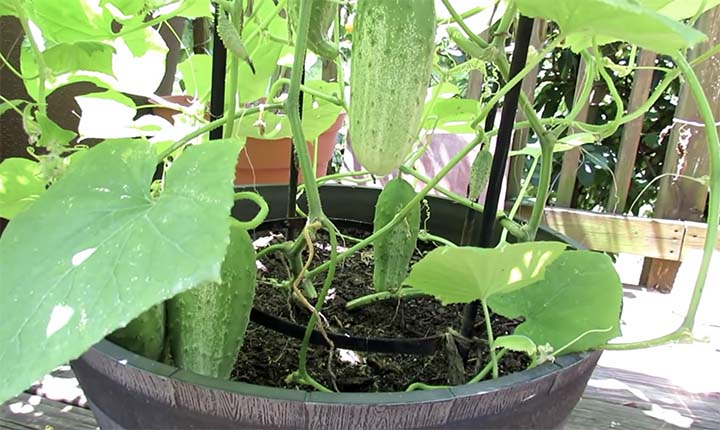 You can grow cucumbers even if you do not have a lot of land. Cucumbers can be grown in containers with a little care.

This guide tells you how to do that.

Types of Cucumbers to Grow in a Pot

In addition, while all cucumber plants are vines, they are divided into bush and vining types. Bush types only get two to three long and do well in hanging baskets and pots. Vining cucumbers grow from six to twelve feet and need a trellis or other support to grow well in a container.

Here are some good varieties to grow in pots.

Salad Bush – gets two feet long and produces full-size slicing cucumbers. Pick these when they are six to eight inches long. Produces in 57 days.

Patio Snacker – is another bush variety. It produces lots of four-inch slicing cucumbers. Produces in 57 days.

Picklebush – vines get to two feet and have lots of 4.5-inch pickling cucumbers. Produces in 52 days.

Here are some good vining cucumbers to grow in pots.

Lemon cucumber – produces round, yellow slicing cucumbers in 62 days. The fruit should be harvested when pale yellow or light green. This variety can be invasive if not planted in a pot.

Diva –is a slicing variety that does not need to be pollinated, so it is good for tunnels or covered porches, or where there are not many bees. Harvest when the fruit is five to seven inches long, which takes 58 days.

Pick a Bushel hybrid — is a semi-bush vine that produces lots of three to six inches long pickling cucumbers. Produces in 50 days.

You can grow cucumbers in pots from seed or from transplants.

With transplants, you have to be careful not to disturb the root ball. You can use a hanging basket and let the vine trail over the edges or use a pot on the ground with a vine support.

What To Prep for Success?

You will need some things at hand when you begin to grow cucumbers in pots.

The best pots are ceramic or plastic. They need to be at least 16 inches deep and at least 14 inches in diameter.

Make sure any pot you use contains holes in the bottom so excess water can drain out. You can use a cloth grow bag but be aware that any water in it will drip out constantly.

Planter boxes and winter boxes work well as long as they are deep enough. They also need drainage holes.

You need a potting mix with lots of organic matter in it for cucumbers. If possible, buy one that is designed for vegetables. If you buy a general potting mix, use a mixture of half potting soil and half compost.

Trellised or supported cucumber vines get fewer diseases and have fewer pests. Even a bush-type cucumber benefits from support. Vine-type cucumbers either have to be trained up a support, or they will sprawl over the area around the pot. For a bush cucumber, a large tomato cage makes an excellent support. For a vining cucumber, a trellis, panel of welded wire, or a pea net of string will work. The support needs to be ten feet tall and needs to be strong enough to support a long vine filled with cucumbers. If you use a pea net, use one with four-inch-wide openings, so the fruit doesn’t get stuck in them.

How To Plant Cucumbers in a Pot?

Planting cucumbers in a pot is not hard. In general, you will want one plant per pot up to a 24-inch pot. If you have a long planter or container, you can plant one vine every three feet. It is better to have too much space between the vines than not enough.

You can start your seeds in the pot you intend to grow them in. Fill the pot full of the potting soil and slow-release fertilizer. Plant four seeds one inch deep in the middle of the pot. Water the seeds after you plant them. Put the support in the pot near the seeds.

When the seedlings come up, pinch off all but the strongest plant. Do not pull the plants out, or you will damage the survivor’s roots.

Fill the pot with potting soil and slow-release fertilizer. Dig a hole deep enough to hold the root ball and twice as wide. Remove the plant and roots from the small pot. Set the root ball into the hole. Fill in the hole with more potting soil. Water the plant in well. Put the plant support in the pot beside the plant.

How To Care for Cucumbers in a Pot?

Once you have planted your cucumbers in your pot, here is how to keep them healthy.

Cucumbers need at least six hours of sunlight a day. They do better with at least eight hours of sunlight. If you are growing your cucumber plants inside, you will need to provide eight hours of bright, indirect sunlight. You can use a grow light for twelve hours a day if you do not have a place with bright, indirect sunlight. Place the light about four inches above the plant and adjust the light upward as the cucumber plant grows, so it stays four inches above the top of the plant. Consult my article if you want to know more details about the amount of sunlight or artificial lights for cucumbers.

Keep the soil evenly moist, but not soggy to prevent overwatered cucumber plant problems. If the soil gets dry, the cucumbers will be bitter.

Do not get the foliage or fruit wet when watering it, or the plant might get diseases. Always water your plants in the morning.

Cucumbers in pots need regular fertilizer. Once the plant is four weeks old, you will need to start using a fertilizer for vegetables. You do not want too much nitrogen, or the plant will grow lots of foliage and have few blooms or fruit. Follow the directions on the fertilizer label. Use the fertilizer with the frequency listed on the label.

Once the cucumber seedlings are growing, place three inches of mulch around the plant and cover the soil. Do not actually touch the plant with the mulch. This will help conserve moisture, keep the temperature stable, and prevent weeds.

There is no need to prune a cucumber plant.

When To Plant Cucumbers in a Pot?

How Long Do Cucumbers Take to Grow in a Pot?

The exact time it takes to get cucumbers depends on the variety of cucumbers you are growing. Most cucumbers take between 50-65 days from planting to harvest. If you are curious about the number of cucumbers one plant produce, read my article – How many cucumbers per plant you can harvest on average?

How To Harvest Cucumbers In Pots?

Common Pests and Diseases for Cucumbers in Pots

Downy mildew symptoms are pale green to yellow spots on the leaves. The spots grow together and become dry and brown. A dark purplish-grey fuzz forms on the underside of the leaf in high humidity. The leaves die. Downy mildew is wind-borne or in soil. To prevent downy mildew, do not get the foliage or fruits wet when watering the vine, trellis, or cage the vine and leave enough space between vines so that there is good air circulation. Copper fungicides will help downy mildew but will not eradicate it. Destroy badly affected vines, so the downy mildew doesn’t spread. Do not compost sick vines.

Cucumber beetles are a big pest problem. These striped or spotted beetles not only eat the leaves, but they also spread bacterial wilt. Because these beetles like to hang out in the flowers when not eating, control must be done carefully to avoid killing the bees that pollinate the flowers. Spray pyrethrum, sold under many names, on the plants, including the flowers, at dusk after the bees have quit foraging. Make sure you spray the underside of the leaves, too. Crush any of the orange eggs you find stuck to the underside of the cucumber leaves.

Squash bugs are also a problem. These are slow-moving bugs that are grey or brown. Squash bugs can be picked off and dropped in a jar of soapy water. If you must spray, pyrethrum or neem oil will kill them. Be careful using neem oil when it is hot. The oil can cause burns to the leaves then, so follow the label directions for temperatures at application.

Bonus: Tips to Grow Cucumbers for Maximum Harvest Based on My Experiences

Here are some tips to increase your cucumber harvest.

In conclusion, you can easily grow cucumbers in pots. The pot should be at least 14 inches in diameter and 16 inches deep. Cucumbers have deep roots. Use a potting soil made for vegetables. Be sure and use a tomato cage to support bush-type cucumbers and a trellis or other large support to support vining cucumbers.