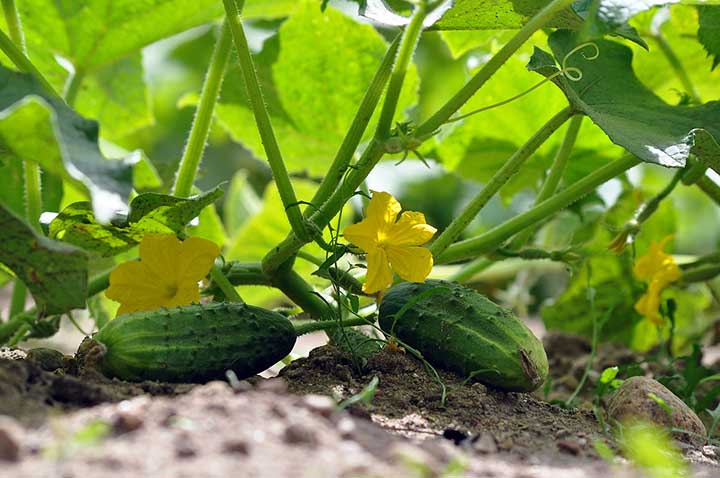 Cucumbers are easy to grow. Sometimes, though, people give their cucumber plants so much love that they make them sick.

This guide discusses what happens when a cucumber plant is overwatered.

Can You Overwater A Cucumber Plant?

Yes, you can overwater a cucumber plant. Cucumbers need 1-2 inches of water a week. Providing more water than that risks causing problems for your cucumber vine and fruit.

Cucumber vines, like a lot of plants, need just the right amount of water to grow well and produce tasty cucumbers. If you do not give them enough water, the vines grow poorly, and the cucumbers are bitter. Too much water and the cucumber vines get diseases. The correct amount of water gives the vines enough water to grow well and produce lots of cucumbers.

Overwatered cucumbers may have wilted leaves. The cucumbers tend to have blossom end rot or rotten bellies. In extreme cases, the cucumber vine dies.

Overwatering In Aeroponic and Hydroponic Systems

Cucumbers are grown in aeroponic and hydroponic systems in rock wool or another soilless medium. Their roots are washed with a water and nutrient solution periodically. If the water is washed over the roots too frequently, or the wash cycle is too long, cucumbers will show the same problems that overwatered cucumbers grown in soil will show.

What Happens When Cucumbers Are Overwatered?

Too much water causes several problems for cucumbers.

The major risk of overwatering is root rot. The roots stay wet and a fungus grows on them. The roots turn brown and slimy, then black. When the roots rot, the plant cannot take up water and the leaves wilt, then the entire plant dies. Once the roots rot, there is nothing you can do to save the plant.

While blossom end rot is thought of as a tomato issue, it can occur in cucumbers. Too much water causes an imbalance of the calcium in the plant, and the fruit starts to rot at the blossom end. This rot can destroy the cucumber completely.

If cucumbers rest on wet ground, especially cool wet ground, the part of the cucumber in touch with the ground will rot. While you can cut the rotten part out and eat the rest, the rot will eventually spread to the entire cucumber.

Yes, if caught in time. Once root rot occurs, the plant cannot be saved. While individual cucumbers with blossom end rot or belly rot cannot be saved, reducing the water given to the cucumber vines can prevent further problems.

To fix overwatered cucumber plants, reduce the amount of water to one to two inches of water a week. Place three inches of mulch around the cucumber vines and under the runners. The mulch will stabilize the soil moisture and lift the cucumber fruit off the wet soil.

How To Water Cucumbers Properly?

Cucumber plants need soil that is consistently moist, not dry or wet. You will need to water your cucumber vines an inch of water all at once. If you live in a hot climate, you may need to water an inch of water twice a week. An inexpensive moisture meter is an excellent investment that will help you know how moist the soil is around your cucumber plants.

Here are some additional ways to make sure your cucumbers are not overwatered.