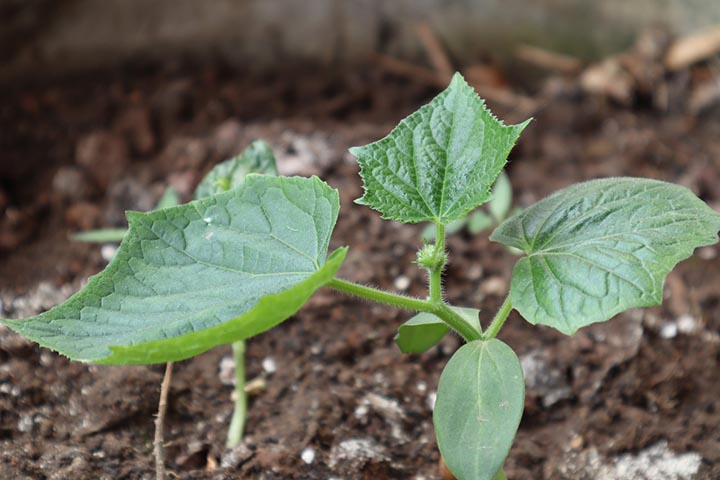 Cucumbers are a popular warm-season vegetable to grow. Cucumber plants go through different stages when growing. Each stage needs slightly different amounts of water and fertilizer to grow optimally.

This guide will discuss the stages of a cucumber plant and what care the plant needs at each stage.

Here are the seven stages a cucumber plant goes through on its way to producing lots of tasty cucumbers. The full cycle takes 55-70 days from planting to harvest.

The first step to tasty cucumbers is to prepare your planting site and plant your seeds. Before planting your cucumber seeds,

Cucumber seeds should be planted only after all danger of frost is gone, and the soil is at least 60 degrees F. They will germinate better at a soil temperature of 70-80 degrees.

A seed takes three to ten days to germinate, depending on the temperature. The seed needs to be in moist soil to germinate, so water daily but only enough to keep the soil moist. If the soil is wet, the seed can rot before it germinates. An inexpensive moisture meter will help you keep track of the soil moisture. Keep the needle in the “moist” range for best results.

The seedling stage starts when the new plant grows up past the soil. The new plant has two leaves that were in the seed, called cotyledon. The first thing the plant does is produce two “true” leaves and start surviving by photosynthesis. Once the seedlings have two true leaves, pinch off the weakest seedlings on each hill at ground level, leaving two seedlings per hill. Do not pull the weak seedlings, as this can damage the roots of the survivors.

Once the vine is about twelve inches long, you can start training it to grow up a trellis. Use plant tape to tie the plants loosely to the trellis. The plant tape stretches when the plant grows and won’t cut off the vine like wire will.

When cucumber seedlings get to be about a foot long, they start putting out runners. The vines can grow about two to three feet for bush varieties and over six feet for vining varieties. Tie the vines to the trellis as they grow so they grow up, not out. Continue to keep the soil evenly moist. No fertilizer is needed at this stage.

Keep the soil evenly moist. One week after the first flowers occur, side dress 33-0-0 fertilizer at the rate of one pound per 100 square feet. Reapply the fertilizer three weeks later at the same rate. Do not fertilize again with 33-0-0 after this because it will encourage the vines to grow at the expense of flowers and fruit.

As soon as the female flower is pollinated, the fruit at its base begins to grow. It takes about ten days for a cucumber to be ready to harvest after the female flower is fertilized. Fruiting takes up a lot of water. Be sure to keep the soil evenly moist, or the fruit will be bitter. You may have to slightly increase the amount of water you give per week to keep the soil moist during this stage but do not overwater it.

All cucumbers are vines. The types of cucumbers labeled “bush” only grow two to three feet long. They are ideal for small spaces or containers. Vining cucumbers can grow from six to twelve feet long. They either need a lot of room or need to be grown up on a trellis.

In addition to saving space, training your cucumber vines up a trellis, wire fence panel, or even string keeps your fruit off the ground, promotes better air circulation, and means the fruit stays clean. The trellis almost eliminates belly rot and keeps the cucumbers out of reach of rolly pollies and other ground bugs. You won’t be as likely to lose a cucumber in the foliage and let it get too ripe, either.

In conclusion, cucumbers go through seven stages: planting, germination, seedling, vining, flowering, fruiting, and harvesting. While the soil needs to stay evenly moist throughout the stages, the amount of water needed to do that will increase as the vine begins to grow the fruit. Cucumbers should be fertilized with nitrogen when the flowers first form and about three weeks later. Do not fertilize with nitrogen after that, or the vines will grow but not have many flowers or fruit.